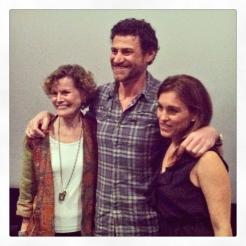 Did you know that Tiger Eyes is the first Judy Blume book to be turned into a film?  It may seem surprising, but we learned even more about the film during the opening night screen in New York City.  Following the screening, author Judy Blume and director Lawrence Blume (yes, they are mother and son!) participated in an eye-opening Q&A alongside their special guest Amy Jo Johnson.