Everything Sucks! is a high school coming of age story set in the 90s created by Ben York Jones and Michael Mohan. We follow Luke O’Neil (Jahi Di’Allo Winston), a new freshman who joins the A/V club and develops a crush on sophomore Kate Messner (Peyton Kennedy), the principal’s daughter who is questioning her sexual identity. Slowly as the show goes on it starts focusing more on the ensemble cast as the formerly rivaling A/V and drama clubs work together to create the school’s first student film under Luke’s direction.

You can watch my review of Everything Sucks!, below:

What I really enjoyed about this Netflix series was that they took the Everything Sucks! title literally. Every episode something sucky was happening to our main characters, from getting accused of pulling the school fire alarm to finding out your mom and the principal are hooking up. It made the series have stakes because you knew something kinda sucky was always on the horizon. At the same time though, some of the storyline became a bit too far fetched. For instance, I didn’t understand the kids deciding to eat nutmeg to try to get high. I imagine eating that would be similar to the cinnamon challenge which is just really difficult and can actually get you really sick. Forget getting high, you’d just spend your time coughing up nutmeg powder. Another storyline that seemed like a stretch to me was when Kate found Luke’s long lost father for him just by searching his name in a phone book. Besides the phone book, how would she even know where he works and what time to find him? That seemed very unrealistic to me. And finally — this one is a bit of a spoiler — the series ends on a cliffhanger where Luke’s long lost dad is outside their family home. He hasn’t seen them in years and didn’t even recognize his son when he was in front of his own face, so what would make him decide to come back now? It just seemed like a weird unlikely leap.

I think there was also a little bit of an issue when it came to pacing the storyline and the characters that we were introduced to. We were really only following Luke and Kate, plus their parents, but halfway through the series they attempted to make it more of an ensemble show. I don’t think it worked in the other characters favors. We learned about them in a choppy way that made you not care about their storylines that much. For instance, when Oliver (Elijah Stevenson) leaves to go to New York, I felt really mixed about it. On the one hand, I didn’t think he was very central to the show so I didn’t personally care, but on the other hand, his leaving had a huge impact on his girlfriend Emaline (Sydney Sweeney). She’s one of the characters that does start to have a bigger storyline as the show goes on. Originally, a drama club mean girl — when Oliver leaves, we see her start to go through this sort of identity crisis. Her whole appearance changes and she eventually starts dressing exactly like Kate and decides she has a crush on her. I’m still not sure if this is her actually becoming a nicer character or if she’s imitating Kate and claiming she likes her because she’s confused and lonely and trying to fill a void. Maybe this is something that will be explored in a second season. 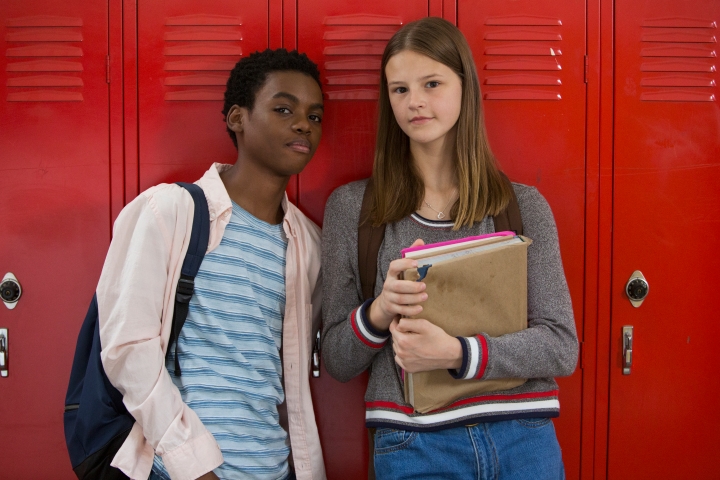 On the topic of Kate, I want to get into her journey of exploring her sexuality. The 90s was an interesting time for exploration as young people — on one hand there was a lot of boundaries being pushed in television and movies, but on the other hand there was still this stigma around being gay. In Kate’s situation, she’s afraid of what people will think of her and wants to be accepted, like anyone does. She tries to explain to Luke that she might be a lesbian and instead he takes it as a blow to himself even going so far as to ask her why she’s doing this to him. Luke is acting like Kate is trying to spite him or purposely punish him by not being into him. They make great friends, but she likes GIRLS. There’s nothing she can do about it, that’s just how it is. I found it really hopeful when Kate realized at the Tori Amos concert that there will be a day when she can be comfortable as herself and not have to hide who she really is.

As Kate went on this journey of figuring out who she is, Luke also went on a journey to learn to break his selfishness. Throughout the series, Luke was a bit of a jerk. He wouldn’t respect Kate’s sexual identity, he was constantly screaming at his friends and wouldn’t let them help on the film, and he basically forced his mom out of the happiest relationship she’s been in in years…all because he was only focused on himself. Eventually Kate is able to help Luke realize that his selfishness was hurting everyone around him and that not everything is about him. I’m hoping to see Luke and Kate’s friendship grow stronger in a second season because I did feel like they would be great friends versus forcing a fake romantic relationship. I also loved that our two main characters are people who are typically side supporting characters — a lesbian and a black guy. I thought that brought a unique aspect to the story to get it from their perspectives and it was a huge step for representation.

I felt like this was a show focused on the students that also did a really solid job of making us care about the adults in the picture, which can be really hard to do. I thought Kate’s dad Ken Messner (Patch Darragh) was a very kind but sad man who seemed to get stepped all over, especially in the love department — that is until he meets Sherry O’Neil (Claudine Mboligikpelani Nako), Luke’s mom. At the time of their meeting, they think their kids are in a relationship, but it turns out they’re the ones who have the true spark. As two single parents who connect their love story was very sweet, young at heart, and really cute to watch.

Everything Sucks! took classic high school moments from the 90s and brought us a solidly good show. I think there’s definitely the potential for the show to improve, but they really hit the nail on the head when it comes to serving us nostalgia and tackling high school students discovering themselves.

She said yes to the dress! 👰🏽‍♀️
Birthday celebrations with my new lil buddy 🌱🥳 #iamgroot
Beautiful day with the fam 💍
On March 12, 2017, @whereis3rick said yes to a first date with me. Now exactly four years later, I said yes! 💍
LUCKY 8️⃣ • It’s been 8 years since I started working at @MTV!
Grateful for this guy every single day 🎣❤️ Happy Valentine’s Day!
That’s a wrap on my first (virtual) #Sundance! See all my interviews and reviews from the 2021 festival dropping at YouTube.com/kaymaldo 🎥
Positive vibes only in 2021 ✨🥂
Grateful for so much this year and ready to kick butt in 2021 💥