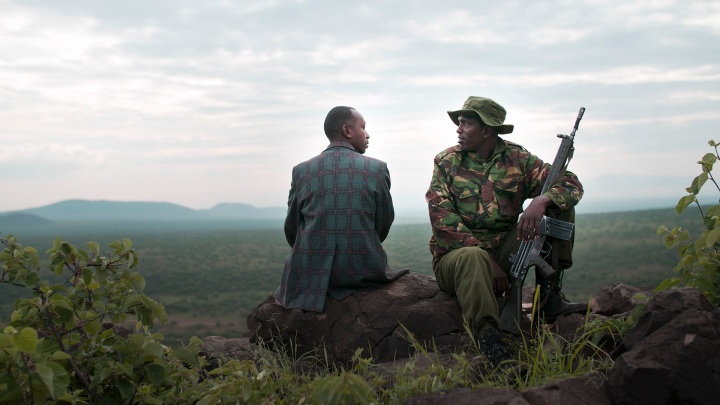 Documentary When Lambs Become Lions by director Jon Kasbe made its Tribeca Film Festival debut on April 20. Set in Kenya, the film follows the struggles three men on different sides of the elephant conservation debate and ivory trade face. Kasbe, alongside his three subjects, blurs the line dividing poachers and rangers to show just how connected their fates really are. “We felt like the perspective of the hunters had never been seen before,” said Kasbe when I spoke to him about what inspired the film on the Tribeca Film Festival red carpet. “I’d never seen someone actually do a film or a story or an article trying to understand why they did what they did, so that was kind of what sparked this whole project.”

Not a stranger to making short films, When Lambs Become Lions is Kasbe’s first foray into feature documentary filmmaking and it took about three and a half years to come into fruition. “It was crazy!” Kasbe told me. “I’d done a number of short films before this and I think going into it in my mind I was thinking, you know, you make a short film that’s 8 to 10 minutes long. I’m just doing like 10 of those in one project, right? That’s easy, I can handle that! But I was completely wrong. It is so much more complicated and it takes a lot more time and patience.”

Watch my interview with When Lambs Become Lions director Jon Kasbe, below:

And what he learned was that the story went much deeper than he initially thought. “It was a much more complex situation,” said Kasbe, “and the sides are really, really blurry. It kind of unraveled into this much bigger project that I imagined in the beginning.”

When it comes to giving advice to aspiring documentary filmmakers, he said the most important thing is to be passionate about your project. “If you’re going down that path really find characters and people that you love, that you want to spend time with, that challenge you and confuse you and you find yourself waking up thinking about them and why they make the choices they do,” he said. “That for me is what kept me [going] through the process.”

Kasbe’s goal with When Lambs Become Lions is to inspire people to ask questions. “I don’t expect or really want people to come away from this having answers or knowing or having a different perspective on it,” he said. “I want people to come away from this asking a lot more questions about what’s going on. Not just in Kenya, but I think throughout all of Africa, in the way that both rangers and poachers are treated.”