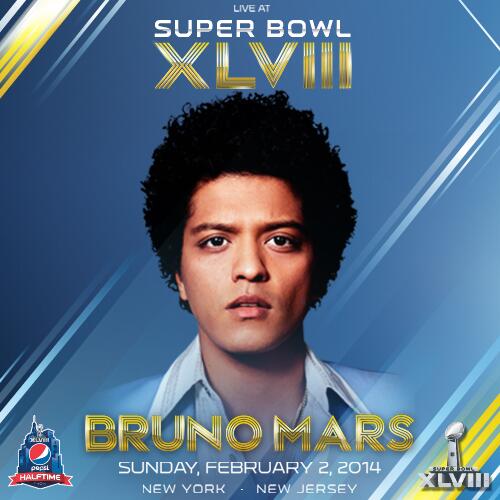 Bruno Mars is gearing up to take over the halftime show at the 2014 Super Bowl. An anonymous source with knowledge of the NFL’s plans revealed to The Associated Press that Mars was picked to perform at Super Bowl XLVIII this February 2, 2014 at the MetLife Stadium in East Rutherford, New Jersey.

Mars will follow in the footsteps of other Super Bowl superstars like The Black Eyed Peas, Madonna, and most recently Beyonce.

While the news hasn’t been confirmed or denied by the NFL or FOX, there is expected to be an official announcement this Sunday at a New York City event in Times Square.

UPDATE: It’s official!  Bruno Mars is performing at Super Bowl XLVIII.  The singer took to Twitter to share his excitement:

Mars appeared on FOX NFL Sunday this morning to confirm the Super Bowl news, sharing that being chosen to perform at the halftime show is “an honor.”

On the topic of performance surprises, he revealed that he has a lot of phone calls to make between now and show time, but assures viewers that “it will be good.”